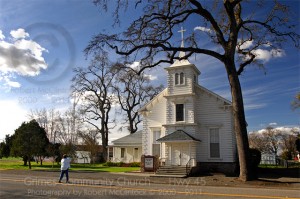 Grimes Community Church (Click on the photo for a larger view)

During my early railroad years on the Southern Pacific Railroad (1965-1983), I worked local freights throughout much of the central valley between highways 99E and 99W (now replaced by Interstate 5). Knights Landing, College City, Hamilton City, Yolo, Woodland, and Grimes were in a world isolated. For the most part, during those years, there was only one local freight train daily taking cars in, and switching cars out and bringing home produce (mostly) from this rich farming area. Today, Grimes, as then, appears to be home mostly to farmers and farm workers. It’s a quaint little place, and more than just a spot on the road. The church sits right on Highway 45 on the north exit.
[Click on the photo for a larger view]

Part of a continuing series of six standalone photos from a journey in February, 2011.
See Stand Alone #002: Highway 45 for the introduction and background to this series.