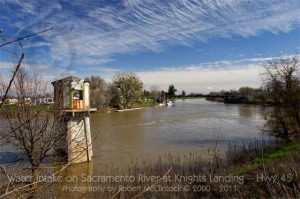 The Sacramento River is rather narrow at Knights Landing, and the draw bridge (just downstream in this photo) that once made way for large cargo vessels is still an attraction with its antiquated control room filled with venerable equipment and seasoned electronics that looks like it might still be functional. To me, this antique structure gives the impression of an abandoned lighthouse standing sentry over time.
[Click on the photo for a larger view]

This is the first of six standalone photos I will be posting from a journey in February, 2011.

From a satellite view, the Sacramento (on the north)/San Joaquin (on the south) Valley looks like an elongated soup tureen, with its pouring lip centered at the San Francisco Bay, dressed by the Golden Gate Bridge. Sacramento, the state capitol, is almost dead center.

The entire valley is laced with roads of every kind, size, dimension, and direction. Many of the back country roads are minimally traveled and make for splendid journeys into charted but unfamiliar territory.

One such road is State Route 45. A state highway, its life is short, traversing northward from Knights Landing to Hamilton City (both very small towns) for only 76 miles. On this journey I covered only half of the highway, the southern portion between Knights Landing and Colusa (about 38 miles). There is great wonder and beauty to be found on this short road just northwest of Sacramento—a perfect area for “quest, exploration, and adventure!” (See my Philosophy page.)