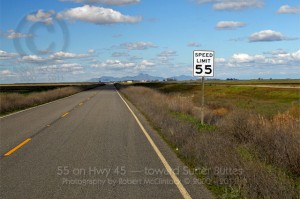 For the southern half, betwixt Knights Landing and Colusa, Highway 45 does very little wending and winding; rather it moves mostly in straight lines and right angle turns. For the better part of a President’s Day afternoon, I saw almost no other vehicle except on the close outskirts of the small towns. On clear days, the Sutter Buttes, which hold the title of being the world’s smallest mountain range, can be seen from nearly every vantage point in the Sacramento Valley. The mountains are about 10 miles (16 km) from north to south and east to west.
[Click on the photo for a larger view]

Due west of the Buttes is the charming little town of Colusa, county seat of Colusa County. Just before Colusa, on the west side of the road is the most enchanting little shrine. The memorial plague reads, “‘Little Shrine’ Site of the first Catholic Mass in Colusa County May 1856. Dedicated by Colus Parlor No 194 Native Daughters of the Golden West May 1957.” Next to the almost microcosm of a chapel sits a large white cross with the inscription on its base reading, “Grand Island Cross 1864 Restored in 1924 by The Knights of Columbus Colusa Council No. 2145.”

Part of a continuing series of six standalone photos from a journey in February, 2011.
See Stand Alone #002: Highway 45 for the introduction and background to this series.