RAILROAD DAYS!
The name speaks for itself. If you are anywhere from the northern California area, it most likely evokes memories of fantasy, fiction, and vague facts from one’s youth.

Union Pacific northbound freight at the Dunsmuir depot. (Click on the photo for a larger view)

“This is the town everyone wishes they had grown up in,” said Barbara Cross, a past president of the local Chamber of Commerce, and perennial volunteer. In many ways, she personifies both the old and the “new” of Dunsmuir: friendly, hospitable, not afraid to speak to strangers, and eager to share information about Dunsmuir’s legacy as a railroad town, fishing center, tourist attraction, and its own special brand of being, well, being “special.”(Be sure to click on the link to “Continue Reading”) 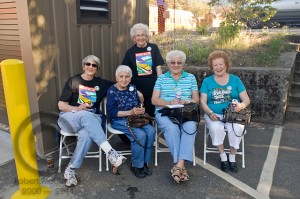 Today there are a few of the “core” citizenry from those halcyon days, “…but the people are the same,” said Louie Dewey, owner of the Cave Springs Resort in north Dunsmuir. This is a common theme one hears repeatedly and consistently. Visiting Railroad Days in Dunsmuir was somewhat akin to time traveling to a place when people seemed more trusting and friendly. Dave Maffei, who traveled from the San Francisco Bay Area and is a regular visitor to Dunsmuir, said “Dunsmuir is like the railroad’s Mayberry. [Note: click on any photo to view all]

Smokey Bear gave "high fives" to the crowd. (Click on the photo for a larger view)

The entire weekend was well conceived and executed, offering a wide gamut of activities to interest just about everyone. There were the railroad cars and engines, of course, and the parade drew crowds

The annual parade was a big hit. (Click on the photo for a larger view)

The River Run returned this year. (Click on the photo for a larger view)

with proportions reminiscent of the golden years of the town and the event. There was much more. The popular River Run returned and brought with it a number of entrants and their families from the extended area. Ryan Neal is from Portland, Oregon. “We are down visiting my wife’s family in Montague when I read about the event in the local paper,” he said, after he took 2nd place in the Five-Mile run.

Dunsmuir's Botanical Gardens. (Click on the photo for a larger view)

Dunsmuir is nestled in a tight space between a couple of heavily forested mountains in the Cascades. Its origins stem from its strategic railroad position as the last stop just before the steep grade up to the plateau where the city of Mt. Shasta lay. Though just a couple of minutes by car, the heavy grade historically required powerful “helper” engines to aid in “pushing” freight trains up through the famous Cantera Loop, while the locomotives at the head of the train pulled. Hence the original name for Dunsmuir: Pusher.

Just to the south of Dunsmuir is the beautifully rugged Castle Craigs rock formation, and just to the north is majestic Mt. Shasta. The Sacramento River graces the town and provides some charming waterfalls. Flora and fauna abound and this year’s Railroad Days provided nature tours and lectures as a complement to the usual festivities.

This was my first Railroad Days celebration since I was a young boy living in Dunsmuir. I had lived in the little mountain railroad town from 1947 (when I was one-year old), through my freshman year of high school in 1961. In essence, then, this was a 50 year anniversary, of a sort. It was a great town way back then, and it still is, though in different yet similar ways. The people I talked with on this journey spoke with the same overtures about Dunsmuir today, as I do of yesteryear.

Ron McCloud, Dunsmuir Hardware. (Click on the photo for a larger view)

One my special treats when visiting Dunsmuir, is dropping by Ron McCloud’s Dunsmuir Hardware. Ron is an historian, a collector of memorabilia, and a really neat guy. He clarified the origins and timeline of Railroad Days partly by memory, partly by history, and partly by the Railroad Days buttons he has collected. “Railroad Days started in 1941 as railroader’s picnic for the workers, but there was nothing during the war,” Ron recalled. “It was rejuvenated in 1947, but there were none in 1961, 1968-71, 1973-74, or 1994.” He continued, “Sometimes it was called Canyon Days (1966-67), River Days (1975-79), and in 2000 it was back to Canyon Days.” Since then, it has returned to Railroad Days, but it wasn’t always called that, either. Ron’s button’s tell us that in 1948 it was known as the “3rd annual SPRR celebration,” the 1950 button says “SPRR Days” (Southern Pacific Railroad Days), and finally, the 1951 button simply says “Railroad Days.”

Tim Holt. (Click on the photo for a larger view)

Dunsmuir Railroad Days is an annual event, but Dunsmuir the town is an on-going delight. It has three first class restaurants, living history, and world-class fishing. Artists of sundry disciplines are discovering the artistic climate, acceptance, and support. There is no admission to my favorite place, the Dunsmuir Hardware, and it is worth a short visit. Ron’s store is a living history museum, the kind that probably has just about anything one could ever want or conceive of, and things unimaginable. You’ll find a collector’s book for Lincoln pennies, with empty slots beginning in 1908, and right above that a mathematical calculator. Perhaps on the next isle rests a pair of iron ice tongs—heavy duty, the kind that is used to pick up blocks of ice. Walking by the front window is no easy task for the curious minded. Just inside, and covered with merchandise, is an old Southern Pacific hand pulled baggage cart. Against the north wall is an (presumably) antique gas-burning kitchen stove. Lining the front window are kerosene lanterns, not unlike those I used as a boy every winter in the 1950s when the power went down.

The "Silver Solarium" (Click on the photo for a larger view)

Drop by, and say hello, and while you’re there, be sure to ask about Robert Morris’s great railroad photographs. At Bob’s website you’ll find a collection of great non-railroad photos, as well—yet another treasure of Dunsmuir.

By the way, did I mention I have a love affair with my hometown?

To see an extensive slideshow with railroad sounds and interviews, click on the “Play” arrow at the bottom left of the image, below. If you are viewing this on a desktop computer, the slideshow should start by simply clicking once on the slideshow image.

To view ALL of my photos from “my journey” to Dunsmuir Railroad Days, 2011, please visit my online photo gallery (click here).

Here are some links that might be useful for YOUR trip to Dunsmuir!